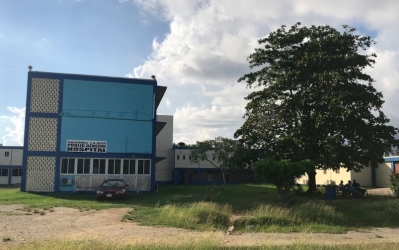 I have written previously about my experiences in trying to understand the limitations associated with delivering surgical care in other parts of the world, most notably Malawi. In this piece I write about my recent experiences working in Jamaica.  According to the Lancet Commission on Global Surgery, a consortium of experts that met in 2014 and 2015 in an attempt to understand the magnitude of the problem, up to 5 billion people around the world do not have access to adequate surgical care. This of course is more than simply having access to a surgeon who can perform a procedure but also includes lack of access to anaesthesia and nursing care, equipment and infrastructre. It also is the result of marginal health care systems that do not allow for adequate triage and delivery of patients to receive care in a timely manner. The Lancet Commission report in 2015 estimated that more people die as a result of inadequate access to surgical care than malaria, TB and HIV combined.

The Key messages of the Lancet Commission include:

From these key findings some core Indicators and targets for 2030 were proposed: 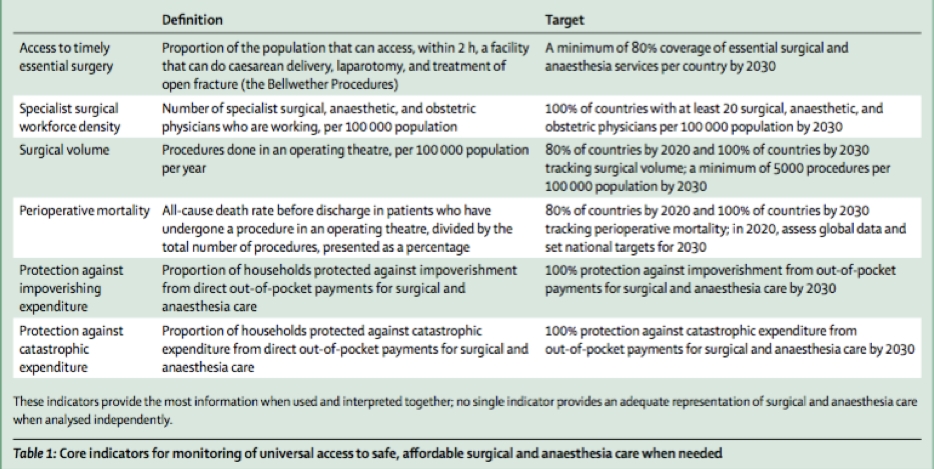 A nice summary of the Lancet Commission can also be found in this short video: 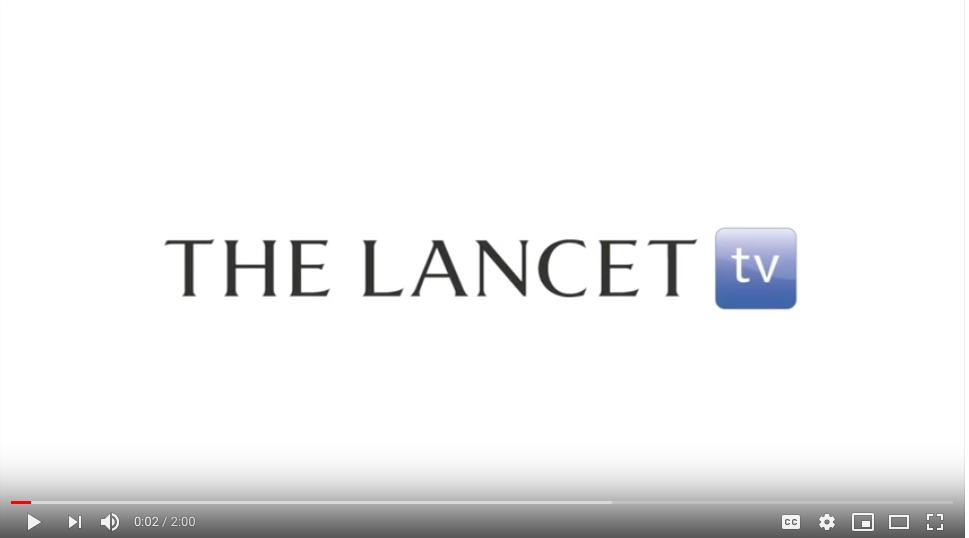 Whether travelling to Malawi, Kenya, Uganda or now Jamaica I have always tried to understand the problems we encounter and the solutions guided by the principles outlined in the Lancet commission. On November 17 I flew with colleagues to rural Jamaica in an effort to care for patients, understand problems in a local context and look for opportunities to scale our experience

SInce 2016 I have spent most of my time trying to build urology services, train local staff and teach process in Zomba, Malawi. The challenge has been enormous but we have done some nice things. We have brought some equipment to perform minimally invasive prostate surgery, have trained a local clinical officer to some competency and are now funding a Malawian surgeon to train in a certified urology program in Lusaka, Zambia with the aim of then coming back to Zomba and build on what we have started. We have sent two of our urology residents to Zomba as well on elective rotations to Zomba and funded a pilot project with Dignitas International to work with the local surgeons to help work through a ‘prostate surgery camp’ in a more rural district hospital.

Dr Lee Errett, a cardiac surgeon and friend, is the Professor of the newly created program of Global surgery at the University of Toronto. I have relied on him for mentorship and advice extensively . 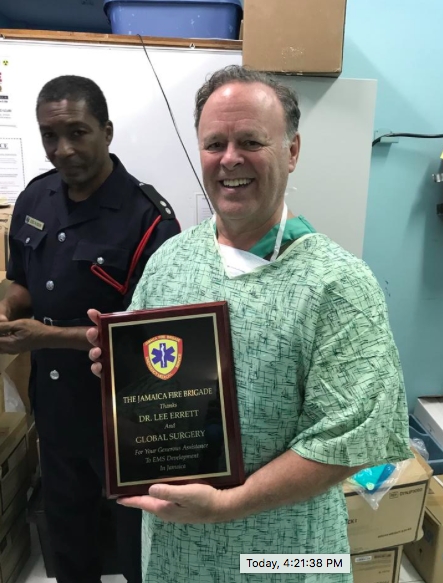 Lee is a remarkable man and has performed surgery on every continent around the globe including Antarctica over the years. In recent years he has worked to develop a broad program in Jamaica based on the goal of delivering surgical care across multiple specialties. In doing so Lee has fostered many key relationships, not only with physicians and other healthcare provides but also local business and political leaders who can help overcome many of the challenges that seem hopeless elsewhere. Given some of this infrastructure already cultivated by Dr Errett (recognized at left by the local fire department),  I was keen to understand the scope of the problem from a urologic perspective in Jamaica.  A plan was hatched

We left November 17 with a variety of surgical equipment and went to work in Savanna la Mar. This is a small town in the more rural southwestern part of the island, in the parish of Westmoreland. I went with a couple of colleagues here from Toronto. Greg Trottier is a friend and colleague from Scarborough while John Honey, to anybody who knows the urologic community in Canada, is a legend. He retired two years ago but essentially has trained almost every urologist to pass through the Toronto program over the last 38 years, including me. I was his resident in 1994. 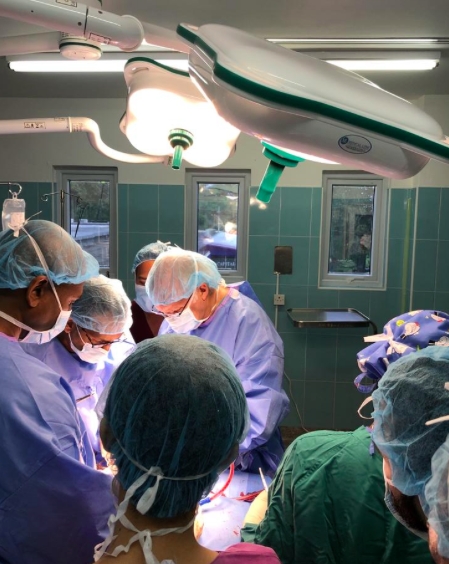 It was a thrill to operate alongside him after 24 years. (picture at right). We also came with David Crook, a good friend of Dr Errett and a philantropist.    He worked hard over the course of the week to build portable recovery room/surgical ward. As with my prior trips to Africa, we left for Jamaica probably with an inflated sense of what we would be able to get done. Some equipment was taken down. As we arrived it was immediately clear that we would need to be creative. One particular shipment was held up at customs in a somewhat arbitrary away for the first 3 1/2 days of our visit. We had to improvise. Ultimately, we managed to look after a number of people although it was a small fraction of what we had initially hoped to do. 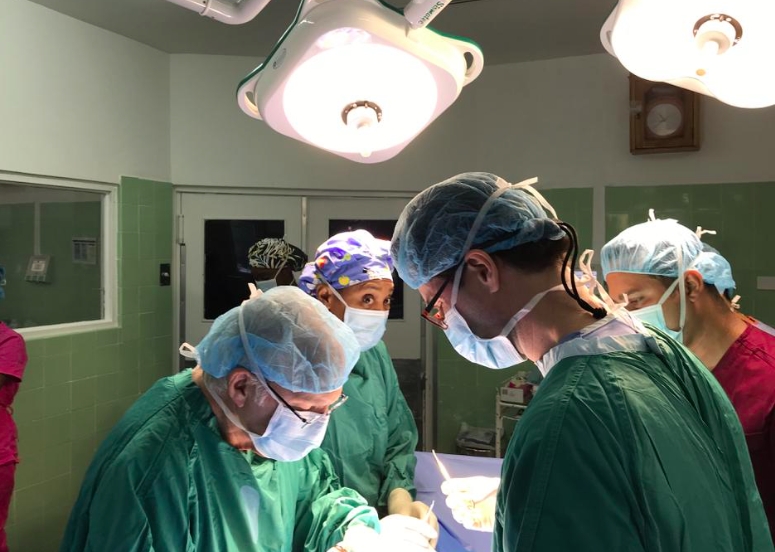 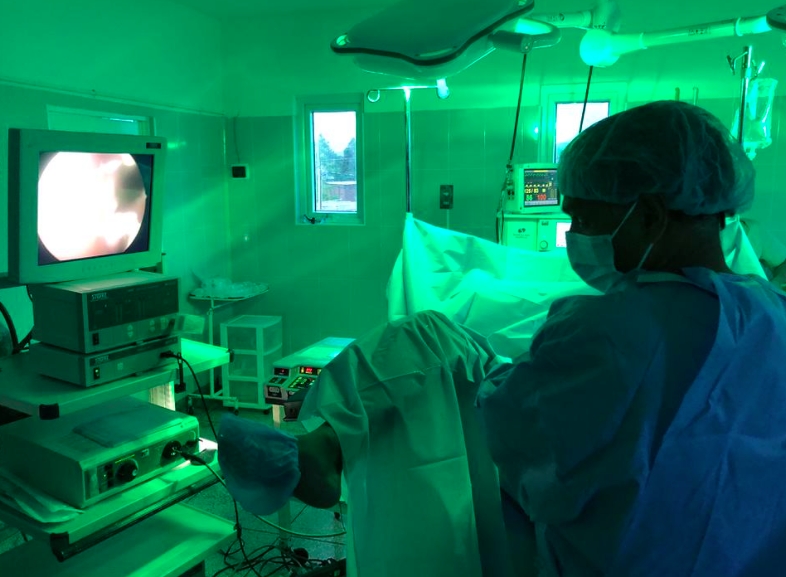 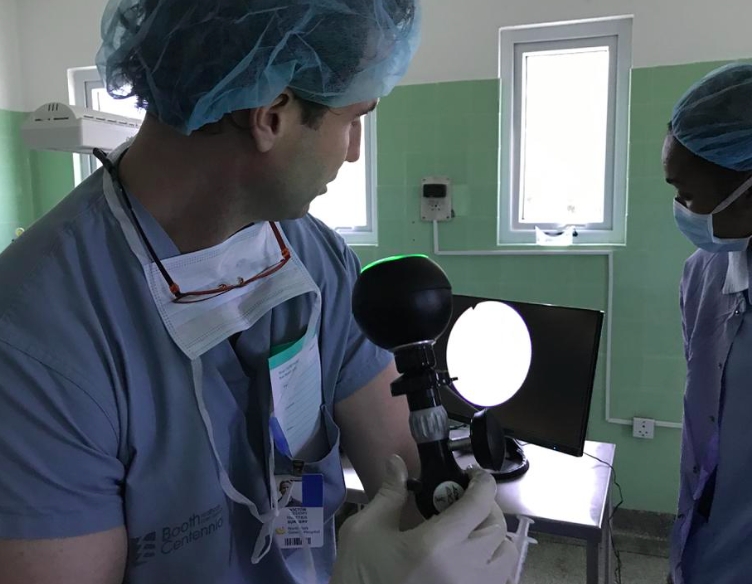 Before and (almost) after.  David Crook working hard to build us a portable recovery room and ward: 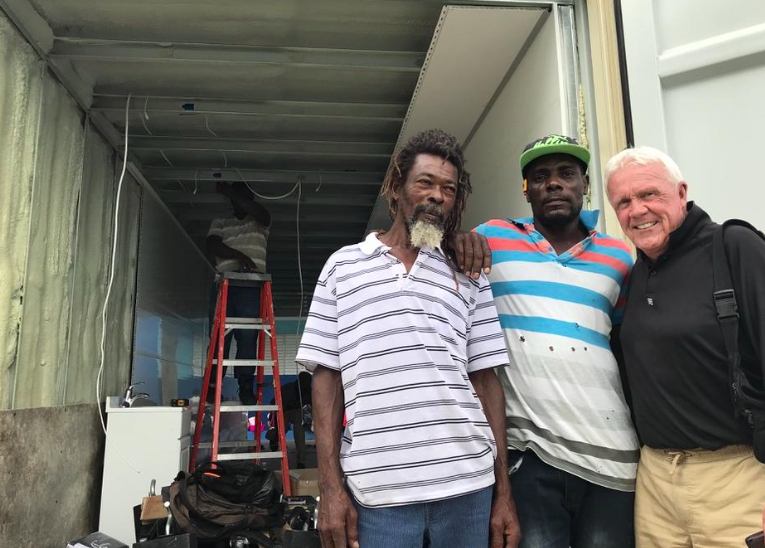 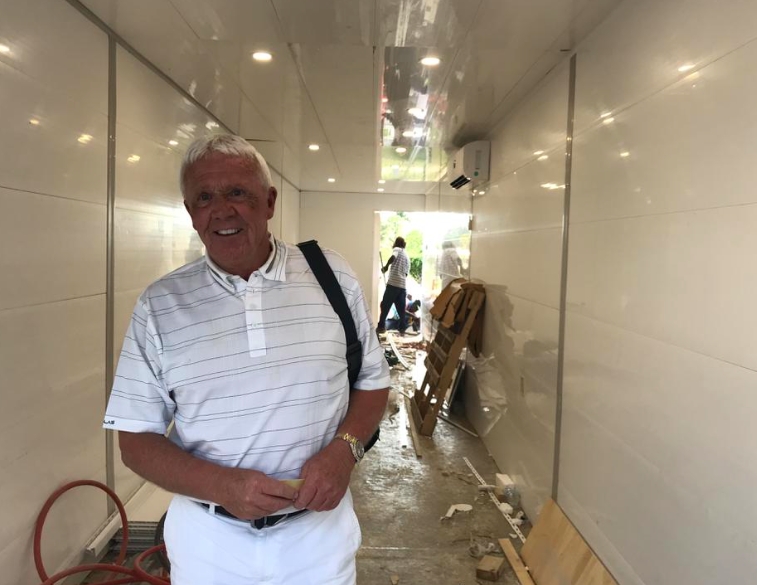 In some respect, what we discovered after a week is that public surgical access in Jamaica is perhaps an even more difficult problem to solve. At the very least there are notable differences to other places I have visited. While Malawi is unbearably and almost uniformly poor, there is a tremendous inequity in the distribution of wealth in Jamaica. Alongside established families and comfortable resorts there exists profound poverty. There is ostensibly a funded, ‘free’ public health care system. Nevertheless there is enough surgical talent and wealth to keep surgeons busy in the parallel private system. The public hospitals are inadequately funded for public patients and a disincentive therefore grows. A prostate biopsy can technically be done within the public system but will take 8-9 months to process. The same pathologist can offer similar work privately and completed within days. The incentive to change therefore clearly does not easily present itself.

Nevertheless it was a very instructive and ultimately hopeful visit. I met many leading citizens who absolutely want to support change and work with us to mobilize the resources necessary to lay down a stronger foundation from which to grow.  There are many things I think we can build on in Jamaica. The two operating rooms are clean and efficient.  The hospital itself is small and overwhelmed but within the surgical group we found a small team of dedicated, highly motivated and skilled healthcare workers. The nurses are hard-working, caring and interested.   They worked continuously and deliberately, looking for every opportunity to learn. 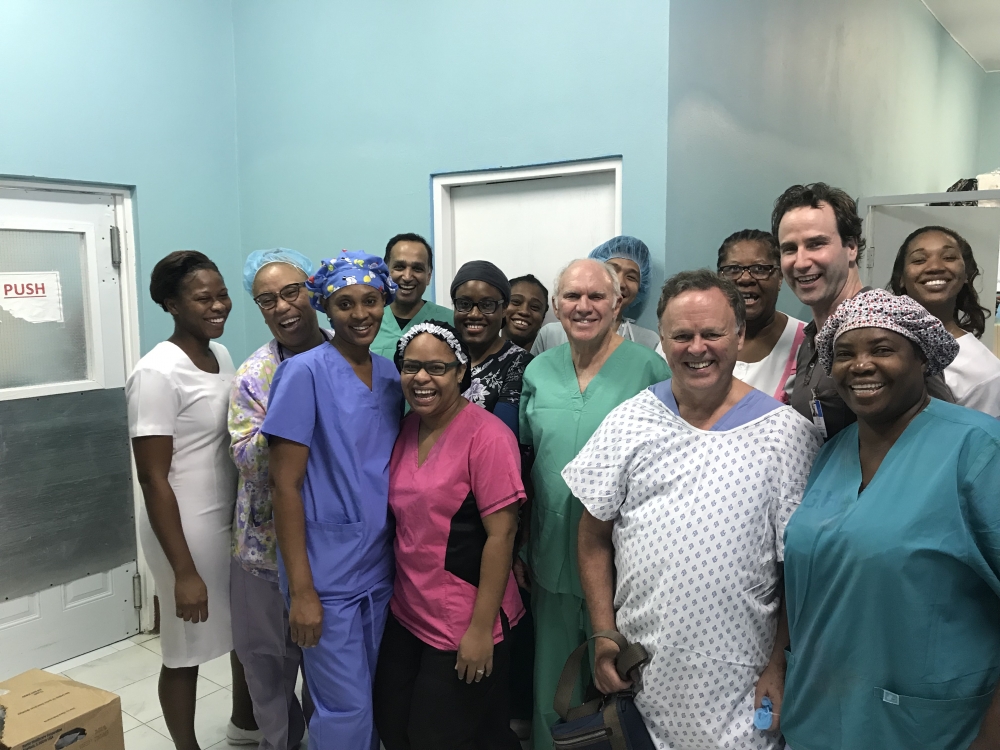 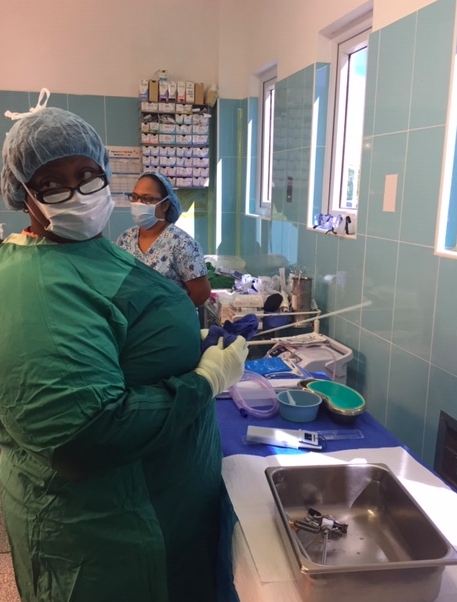 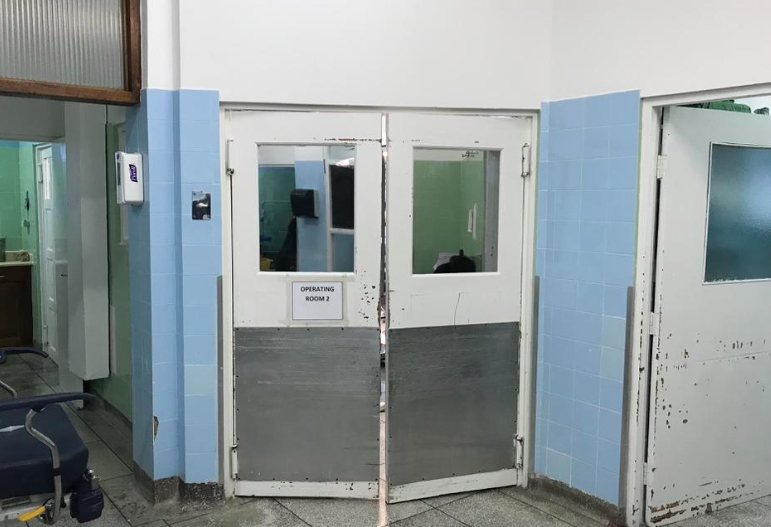 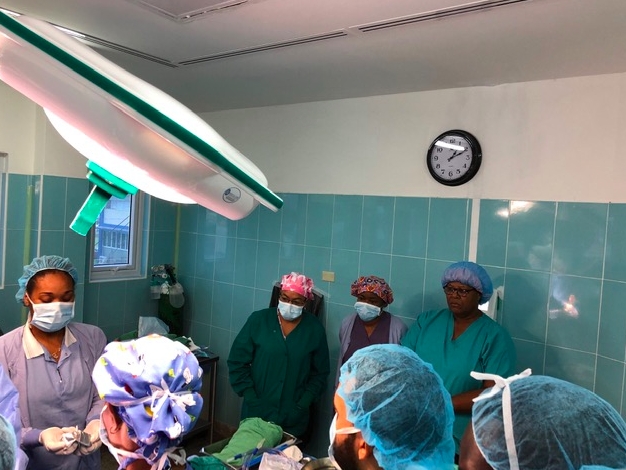 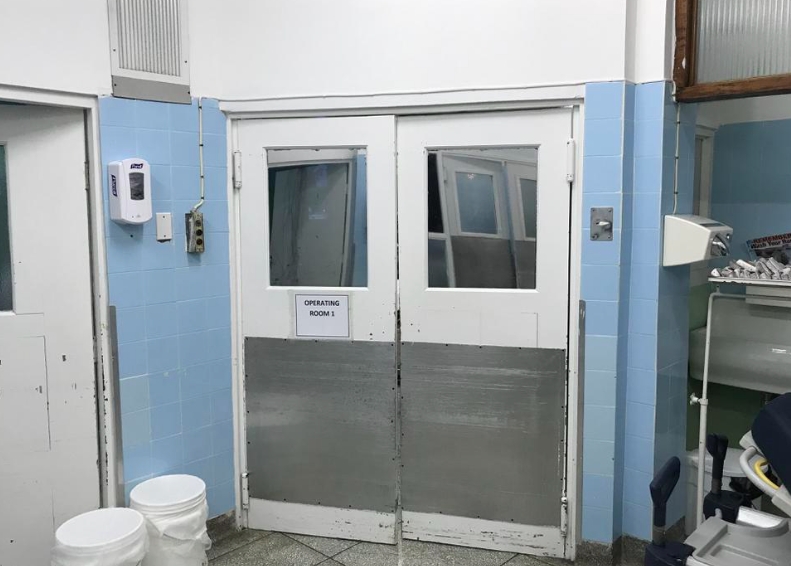 We met a spectacular anaesthetist,  Dr Camille Campbell. She was thoughtful, talented and always calm. She was a pleasure to work with. We will aim to look for opportunities to bring her to Toronto to further support any training interests that she may have in the future. 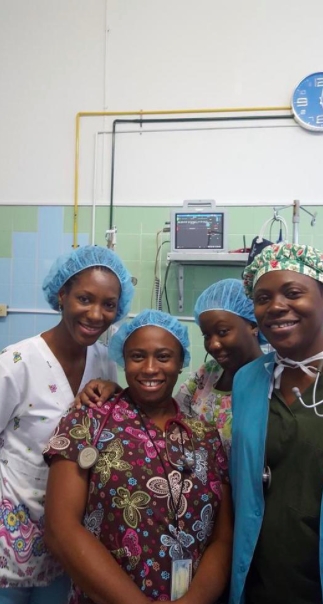 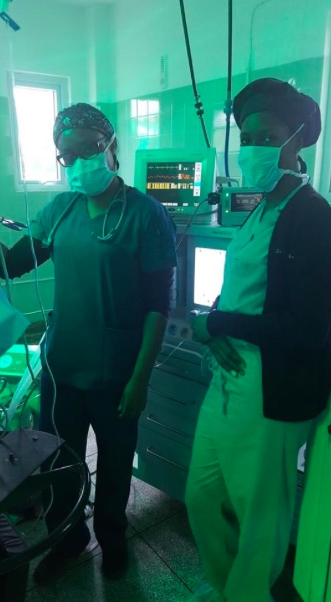 We met Dr Alfred Dawes, a general surgeon and worked with him on several things. A lot of the endoscopic work that we normally do as urologists requires expensive equipment and supplies. We brought some of it down but that may not always be possible. With Dr Dawes we did some cases on men with unusually large prostates, best treated with a more conventional surgical incision. Scalpels and sutures require far less resource than fiberoptic scopes. 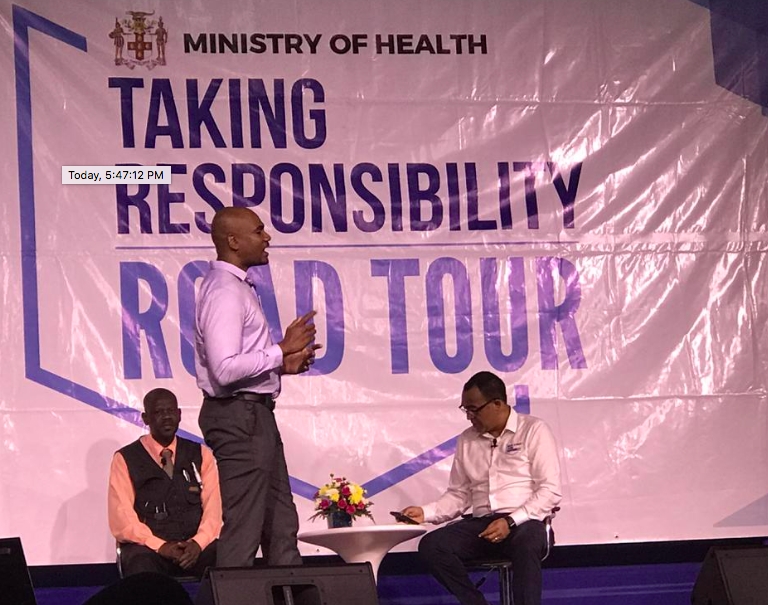 If we could ultimately train Dr Dawes, a general surgeon, to provide this important urologic service we can perhaps create some sustainability that we can leave behind within the public system. He is thoughtful and well-respected. (at left giving a talk to the community on road safety along with the Minister of Health).There are simply not enough resources on the public side to care for these men. One man that we operated on was unable to void since 2008. He would come for monthly catheter changes and simply get passed along with no end in site and no plan. He does not care about what surgical technique we may use. He just wants to void again! It is these men that we must aim to care for.

Finally we met Dr. Roy (Chippy) McGregor. He is a terrific urologist in Montego Bay, having trained in the UK. He came to visit us one day and stayed for dinner. He has a busy private practice but has a very difficult challenge in being able to look after men in the public system. After our conversations there may appear to be a nice opportunity to work in partnership, swap ideas and maybe help manage some of this backlog in partnership with him in exchange for some equipment and educational initiatives back here in Toronto. The one attractive thing to me about Jamaica as a place to create a sustainable model for urological health is that it is much closer to Toronto and there is no time zone change to manage. That potentially allows for more frequent visits and also expands the pool of surgeons here at U of T who could potentially go. The weather is pretty nice too!

In any case there is still much to reflect on. Greg, John and I will debrief over the next few weeks and try and do a deeper dive into what we learned and how we can build something scalable as we move along.

In parallel while I was in Jamaica through our university global Urology fund the Malawi program continues to develop and build. Our COSECSA resident is one year away from finishing. During our time in Jamaica we did send one of our senior U of T residents to Zomba along with my last fellow and now colleague, the superb Dr. Olivier Heimrath. A further note on their experience will follow over the next few weeks

There is much to do in 2019 and beyond. I am taking a multidisciplinary surgical team from Michael Garron Hospital to Kenya in February and aim to be back in Malawi next summer.   For those who may be interested, contributions to our Global Urology Fund can be made here:

Seasons Greetings to all and the very best in 2019