Weighing the merits of the Proposed 2016 Ontario Physician Services Agreement 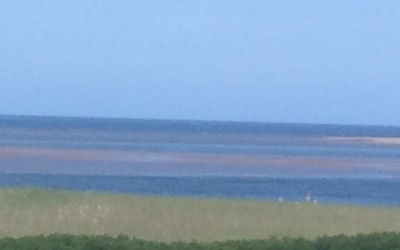 A lot has been made about the acrimonious relationship between Ontario physicians, their negotiating arm, the Ontario Medical Association and the Ontario government, particularly over the last year and a half. As essential partners in the delivery of healthcare to all Ontarians, physicians have long cared for their patients, guided by long-standing physician services agreements negotiated with government in good faith and revisited every three to four years. To look at these agreements certainly over the course of my career is to see times when the public sector is both flush with resources and when it is not. These contracts have little to do with whether there is a Liberal or Conservative government in power.  Physicians have continued to deliver care to their patients despite the absence of a physician service agreement since 2012. To follow along casually in the background and perhaps focus on the occasional headline, the public may only see a battle that pits seemingly affluent, self-serving physicians against a government that is championing the cause of the taxpayer. Since 2012 there have been at least two reconciliation exercises by the Ministry of Health on physician compensation to make up for shortfalls in healthcare funding. These roll backs currently amount to 7%. Given that Ontario's population continues to grow and age, that funding deficit will inevitably spiral upwards.

To be very clear, the current impasse is very much about money and how it might be spent but it is definitely not about income.

Two Mondays ago while running my typical heavily booked, stressful office, the family practice resident that was spending time with me (I was teaching as an added task to my day as I often do) casually mentioned during a short break that an agreement had been reached between the government and the OMA earlier that morning. After seemingly no progress over the last 24 months, this obviously caught most people by surprise. Up until that morning there had not even been the slightest sense that the two sides had even started to negotiate again. I committed to reviewing the document at day’s end. Since that time there has been significant debate across the profession as to the merits of this agreement.

A six page summary was quickly released for membership review. The OMA, while admitting that this is not a very good agreement, has endorsed it, recommending ratification so that physicians are not subject to further unilateral reductions at the discretion of the Ministry.  Daily emails reinforce the same message. 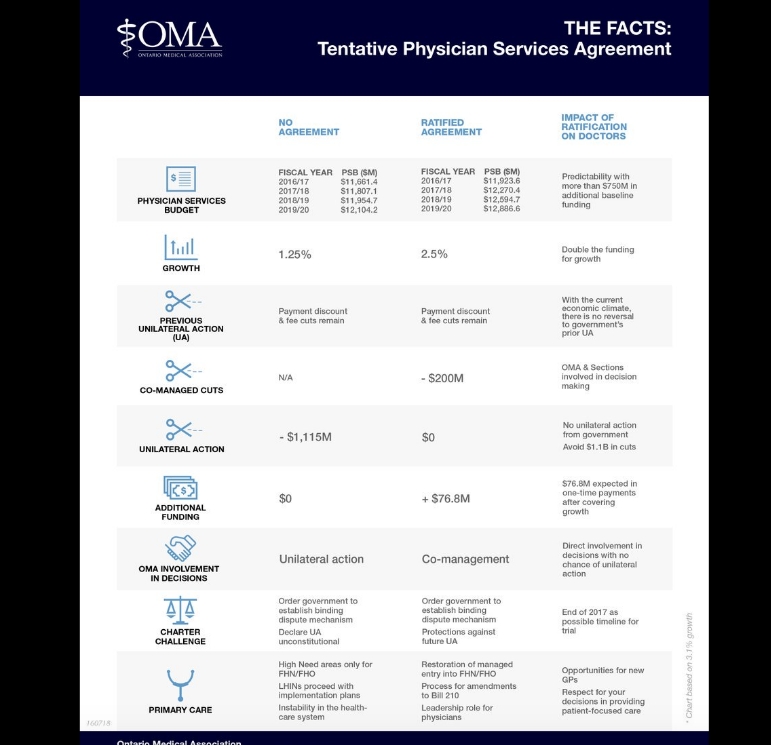 The argument is that we will be allowed to be partners in reforming the system as we move forward with promises to look for efficiencies and modernize the fee schedule. Some have complained that the six page report is not long enough or filled with enough detail to make an informed decision; that it is too vague and incomplete. There has been a lot of debate about what the numbers mean and how much really will be available into the future.  Infographics from the OMA suggest the hope of stable healthcare funding over the next four years. I do think that OMA leadership has tirelessly worked in good faith for countless hours to try and navigate us to this point.  They have earnestly tried to articulate a comprehensive message.  They have earned my respect and thanks for all of this.

In my mind however, I don't need to really read past the first few lines. I can make up my mind essentially there. To accept the proposed agreement requires as a starting measure that the 7% cuts that were put in place to reconcile the funding deficit in the healthcare remain intact. The profession cannot agree to this in principle. It is not for me to know whether physicians get paid too much or not enough. Perhaps we should be paid less. I just don’t know. However, what I do know is that if as a society we all value good public health care then I think we all own a share of that responsibility when resources are inadequate to fund that system. Accepting this agreement establishes as fact that a funding deficit for the care that physicans provided their patients existed in Ontario between 2012 and 2016 and that physicians have agreed to accept sole responsibility to make up the difference in that gap.

That is a dangerous precedent.

There are five basic principles to the Canada Health Act. It basically enshrines what Canadian citizens collectively value. I think these are all very reasonable. They are worth reviewing again:

1. Public Administration (healthcare shall be carried out by a public authority in a non profit manner. Accountability to the taxpayer, healthcare users and providers is also made clear)
2. Comprehensiveness (this is self evident and implies all meaningful care be covered)
3. Universality (the latest in best evidence care should be made available to everyone regardless of means)
4. Portability (ensures coverage as people travel across provincial borders)
5. Accessibility (This mandates an expectation of reasonable access to health care facilities and for physicians, hospitals and others to be provided reasonable compensation).

Clearly this fifth responsibility is given to our governing bodies.

I do think physicians have an important role to play in protecting the Canada Health Act. My recent visit to Malawi, Africa reinforced in my mind that access to quality healthcare for all is a basic human right. It becomes clear however as one reads through these five tenets that government also bears an important responsibity. Indeed, so do all Ontario citizens.

For most of my 20 year career we have been trying to streamline healthcare. The relative cost of technology continues to rise while patient expectations continue to and quite rightfully demand the best. Hospitals such as mine have nobly continued to balance their budget despite being given less and less by government, to fund what is necessary. Surgical blocks have been reduced or closed for years across every hospital in the province. These manoeuvres predate the current post 2008 fiscal crisis by many years.  Up until now, the work always seemingly gets done. Hospital administrators, doctors, nurses and others tirelessly triage the important things like cancer care. Other things (kidney stone surgery as one example over the summer) get pushed down the road a little further every year. However, I have long said that 2016 is the year that things might come to a head. Budgets are no longer so easy to balance. Cuts to patient care go a little deeper. The increasingly generous philantropic nature of Canadians has masked many shortfalls with respect to capital expenditures and much needed equipment for years. Even this is not an endless resource as many other worthy causes outside of healthcare also compete for the same dollars.

It begs the question then that if everyone within the system is seriously trying to address the funding gap, work harder and make sure patients are cared for, should we not expect the same level of commitment from government?  After five years of 0% hospital budget increases, this past February this government announced that it was "investing” in hospital care. It prompted this banal tweet that amounts to 1% in new funding for hospitals relative to the prior year: 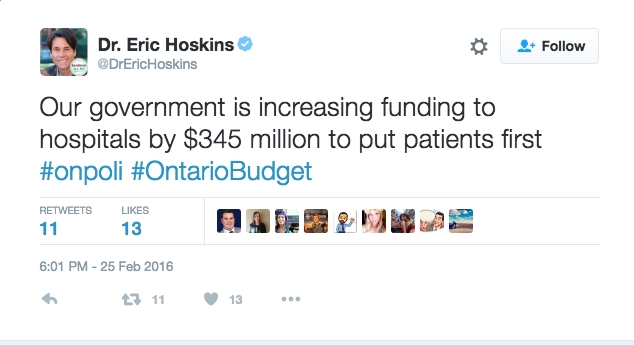 The Ontario Hospital Association which should be lobbying for better and more sustainable funding for all hospitals and understanding that 1% hardly made up for the increasing gap created over the last few years could only manage this response: 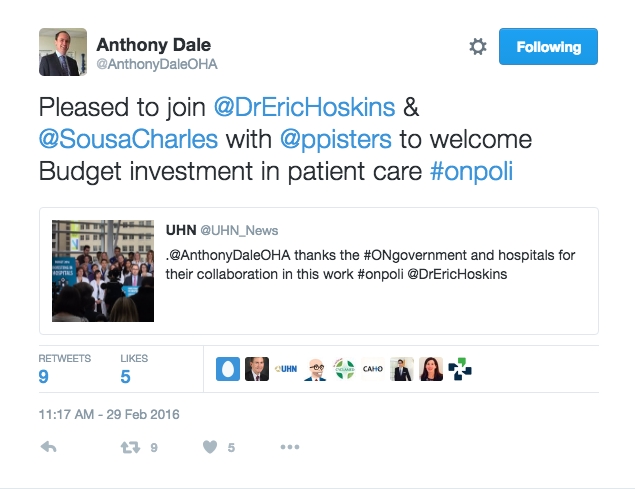 If Ontario physicians accept this current offering then we are basically agreeing to be the only ones to disproportionately reconcile any funding deficit. That is a very big problem.  The profession is an easy target as certainly we all do 'well enough'. The populist strategy has its merits.  We would declare that we are willing to make up the difference while such silly, pandering public declarations with an eye to the next election will continue to propagate the myth of a well-funded healthcare system into the future. Yes we need to tighten our belts. Perhaps we do need to rollback the fee schedule but this has to be done in true partnership with government, policy workers and citizens at large. Anything less than that will eventually still lead to the demise of this public system over time. You can only kick the can down the road so far. The current course is not sustainable. Good public healthcare, its stewardship through difficult times and its long term health is a social contract that binds us all.

Is the six page summary too short? I think it is long enough. It is time for all parties to get serious about what our healthcare system will look like into the future, well beyond election cycles and move forward with broad consultation, mutual respect and in good faith.